Our Techni Mobili Expandable Modern Desk is the perfect fit for your home-office. Crafted with MDF panels on its desktop, this desk strikes a clean-lined silhouette in dual tone.

The tones are antique mahogany and grey finish. The durable metal legs make its structure sturdier as a workstation . The tabletop surface expands into two storage space on both sides, great for storing your work essential materials, while a pull-out front drawer offers out-of-sight storage for your keyboard, accessories or even a small laptop. This desk includes a 5-year limited warranty. Color: Mahogany

Hands down the drawers are the coolest part of this desk. Love all the storage it packs in for the size.The subtracted stars address quality and construction.1) Do not built this alone if you don't have to. I did, and there's several steps that would have been much easier with someone to help you steady or balance the pieces. I think I could have halved the build time with a friend or family member.2) Strongly recommend having a drill on hand or borrowing one. You can use the included Phillips head screw driver, but it's going to take longer and give you some trouble.3) Mine came with a defective piece. You'll see in the picture one of the part #8s came with the holes drilled into the wrong side.This forced me to install it with the unfinished bottom side facing up, meaning I couldn't adhere the bottom properly as a result. This ended up still working out since there are other places where the bottom piece of the desk is joined to the drawer, but still annoying.4) Some of the screws have a plastic anchor sleeves on them, which keeps you from screwing it in all the way, ie too far. While inserting/tightening one, this sleeve slipped and I ended up with a lovely hole in the other end, which peeled up some of the faux-wood surface. A lot of the cam locks were also falling out. Mentioning that to say the hardware and components are not perfect.5) Finally, surprised others haven't mentioned it, but the faux wood has a certain smell upon opening. It's not a terrible smell, but it's very lingering and persistent. I put this in a room with not too much ventilation, and I still smell it when I walk in. It's not a deal breaker and I admittedly have a more sensitive than average nose, but just pointing it out in the event you prefer to let it air out somewhere before taking into your home office.I think when I bought this, I also thought the side expanding drawers meant the desk surface itself could be expanded. The latter is not true because when opened, there's nothing to fill the gap and I also wouldn't recommend putting significant weight on the opened panels. If you were unrolling a long scroll of paper or a viewing a poster or blue print though, you might like to open the drawers to expand your work surface for this purpose.

Great quality, sturdy and a gorgeous piece for any home. Shipping was fast added with great customer service. I also ordered my office chair from here (Shopango) loved it, matches my new desk. Will definitely order more pieces from here in the future. 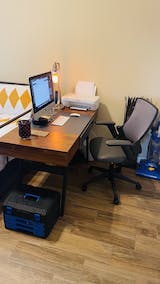 This is a great working desk, enough space for two monitors and a lap top. Has sliding drawers on each side that are not visible unless you know they are there. Great color, sturdy, but does take several hours to put together.

This desk was perfect for us. It was a replacement was a traditional 6 door desk (3 pull outs on each side). The sliding storage drawers on this desk provided enough space for our content and enough desk height for a 6' person. Plus it's a cool looking desk. Just set aside about 4 hours to assemble.

Added to your cart: